BBB in the neighborhood – The Pagkrati Project: Elf, Bunny and the Mantis

Anna Alexoudi creates a comic-route to Pagrati through three different animated characters exploring the area. Elf, Bunny and the Mantis is part of the project BBB in the neighborhood – Pagkrati Project which was implemented on the occasion of the action “Culture in the neighborhoods” an initiative of the Municipality of Athens and the Athens Culture Network.

The inspiration came from a route I did for a while quite often. Along this route, there were many small squares and many small parks where various people were walking their pets. Wanting to highlight exactly these small, public breathing spaces in the area, I created a story… something different, where an elf meets a rabbit ( Bunny), who has a Mantis religiosa  (Mantis) as its pet. The rabbit, therefore, asks for the elf’s advice, in order to show it the appropriate places in the area where the mantis could walk! And so through 8 photos with sketches, we locate on the map these exact places.

The way this project was implemented was initially with the monitoring of the workshops at the Skrow theater by the team of Balkans Beyond Borders, then with photos, I took along the way and finally with the design of the illustration in the Clip Studio program.

Elf, Bunny and the Mantis

“The Bunny came to Greece for work and is currently living at a small apartment in Agios Artemios district. It has a huge mantis as a pet, mostly because it loves insects but also for protection (people and animals are terrified of the mantis!). The Bunny wanted to find, as soon as possible, small parks to walk its mantis. So, he found an advertisement on the internet about an Elf who was giving small city tours for free. They met at Ilioupoleos Avenue and Imittou Street corner, right outside the First Cemetery of Athens. The Bunny was excited that it was living next to the city’s biggest “Open Museum” (as an article about “open space art” was mentioning)”. 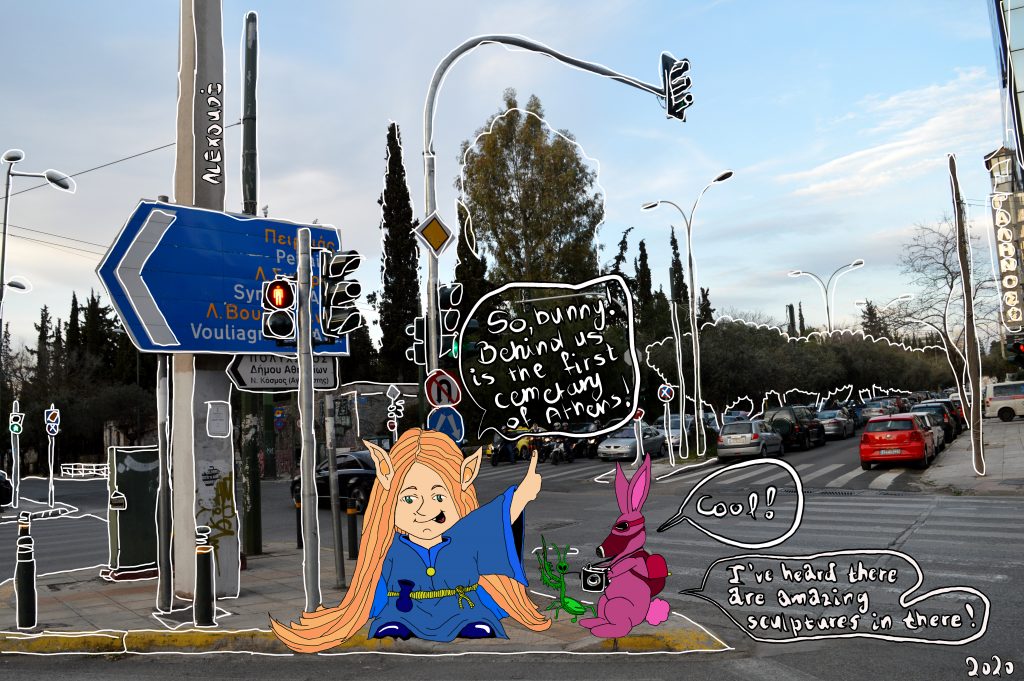 “Few moments later, they found the first small park. The Bunny and the mantis were more than happy. It was close to home, and easy to access”. 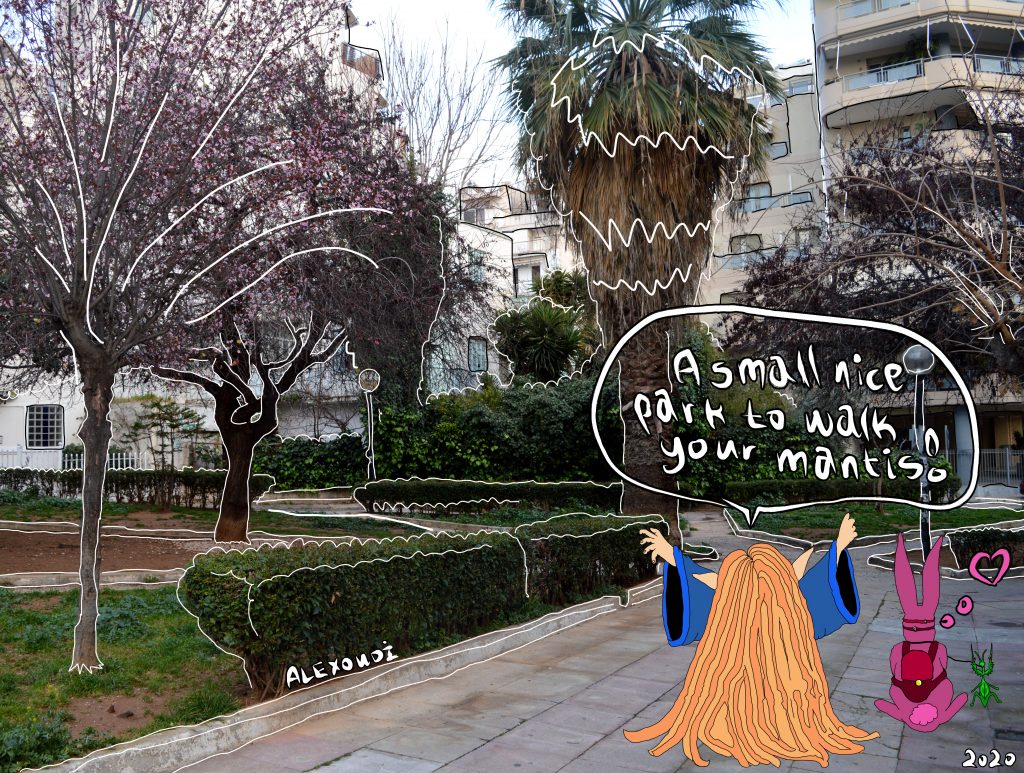 “The next stop was next at Embedokleous Street. It is a small quite road, really beautiful and there are shops where you can eat something, drink a coffee or a beer! The Bunny loved it and couldn’t wait to come here for a night out”. 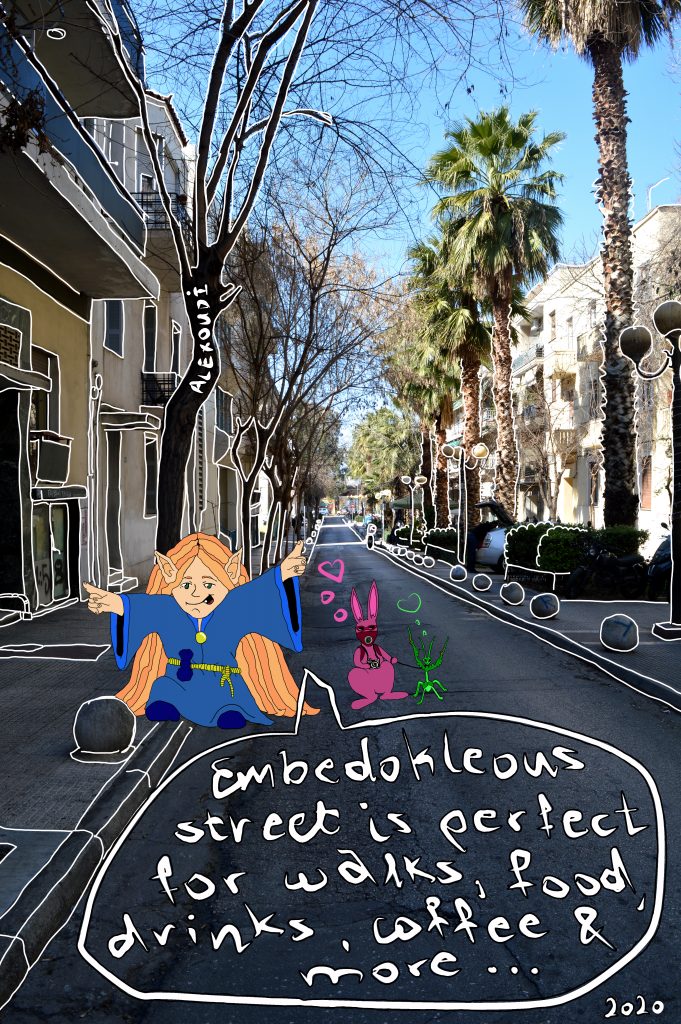 “Right in front of them, was the Varnava Square. This square has beautiful orange pergolas, and the Bunny and the Elf were taking pictures of themselves like supermodels for twenty minutes!” 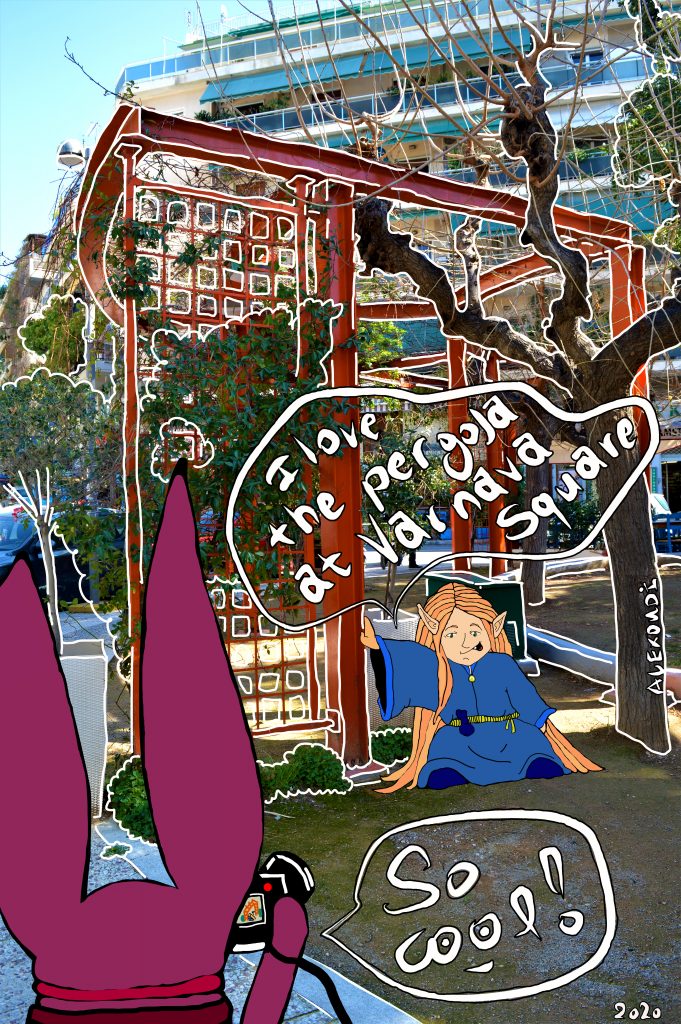 “After the photo shooting, they walked to the Church of Prophet Ilias. This church has a gorgeous park right behind it. The mantis was super excited with the trees and couldn’t stop climbing on them. I think it was a little bit boring for it, waiting for the Bunny and the Elf to finish their photo shooting earlier. And, it was really happy to be on all these plants, after all!”

“As they were walking down the Filolaou Street they saw another small park, hidden between some small roads! Its name is “The Square of the Frynonos Street”. The Bunny was tired, because the mantis was extremely energetic. Which of course was only fair, because the poor mantis had a long trip to Greece and the apartment was too small for it to run!”

“They made one more stop before their small tour ended. The Bunny took something to eat, and the Elf showed them a huge phoenix tree! It was also a small park around it with some benches. This park was a “continuity” to the small park they saw at their first stop at the photograph number B1!” 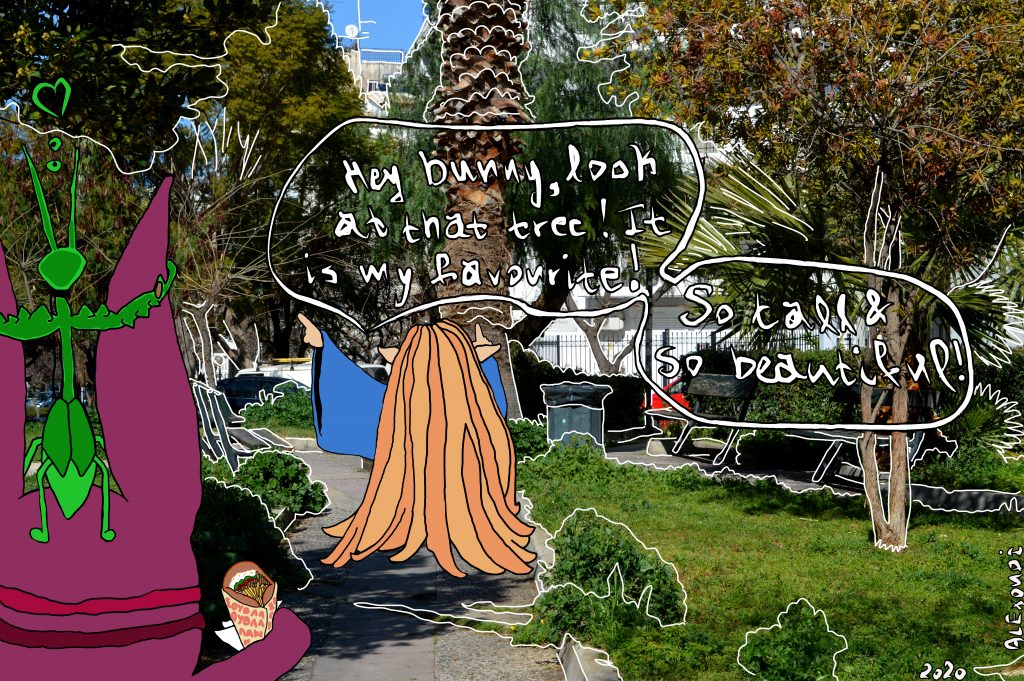 “And their walk ended at Plyta Square. A huge square, beautiful, with plenty of space to walk. It has also some small cafes and places to eat something around it! There are also two basketball courts! This Square was a perfect place for them to rest and talk. They became friends, and promised to go out some night for food and drinks at the amazing districts of Agios Artemios and Pagkrati! Also, the mantis tried to make a cat friend, but when the cat woke up and saw the mantis standing in front of it, it jumped on the closest tree. As I told you, people and animals are afraid of the mantis! That’s why the mantis loves the Bunny so much! Because it is its only friend!”

Check out all the artworks of “The Pagkrati Project”

With the support of

Athens Culture Net is the city’s first collaborative network of cultural organizations, providing a forum for arts leaders to build relationships, share resources, and develop joint programming across Athens. ACN was founded on the belief that collaboration is the key to the long-term success of any cultural community. By bringing together the leaders of Athens’ diverse and vibrant institutions, along with the artistic groups and collectives, we hope to build a united and resilient creative sector and increase access to quality cultural programming in all neighborhoods.